What are you looking for?

I am very honoured to have world-renowned Aussie miniature painter David Colwell write Stonebeard Miniatures first every community article! Have a look at this amazing insight into how he approached painting the box art for Takeuchi Marina from Neko Galaxy Miniatures and a look into his thought process when approaching this topic with the many many box art commissions he has done since! 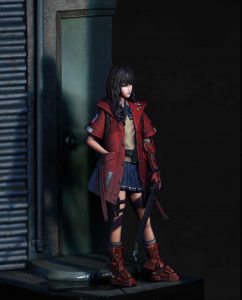 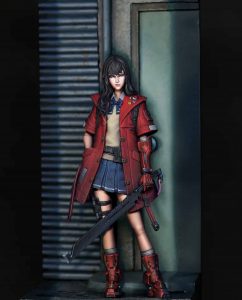 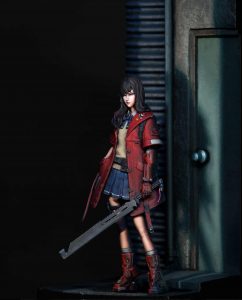 When it comes to references for the base building part of things I had a lot of references of cyberpunk stuff and spent a lot of time looking at what modellers had done to make an alley and background that was enough to make it seem like a small back alley but without restricting the potential for viewers to see something other than I intended. As I’m always striving to make my prices both specific and broad at the same time it’s an interesting balance to try to find, I want to tell the story while making sure the story is clear but allowing for the viewer to interpret the circumstances behind the situation themselves with broad possibilities. I had to also work within my basing skills which are admittedly an area that I lag behind in-without a doubt they’re definitely my weakest area. There was potential for the background to become cluttered and complex. This could take away from the sharp visibility of the scene, especially the border of the cast light.

For example I had originally intended to put some more detail in the back ground. I wanted to paint some graffiti free hand on the corrugated door and also put some words on the standard door behind her. In the end I didn’t do this for two reasons. Reason 1 (which is the primary reason) I felt like cluttering up the background with graffiti might have significantly distracted from the shadow effect. It would have been a real shame to put all the effort into that freehand and have it ruin the shadow. I decided not to risk it because of…. Reason 2 which was that I was not confident enough with my freehand skills to create those shapes on the corrugated door while also doing the shadow. The shadow on the flat door was hard enough let alone the corrugated door. That is some of the most difficult and time consuming work I’ve ever faced and adding freehand to that? I’m sorry I just didn’t believe I could pull it off with my skills at the time (nor do I think I could do it now).

Freehand is another area where my skills are lacking and so I will be looking to find more reasons to including some freehand where I can in the future. I don’t like to force free hand onto a model for freehand sake so I find it difficult to find the right model for these choices, but I am aware of this and very keen to shape up in this area in the future. I have include a collage of a bunch of the references I used for this model below.

Q5:What led to the decision to create a background for this piece?

For some reason I had the desire to create a background for this model from the very beginning. Both ideas incorporate a background and so I think I just rolled with it. I don’t specifically know what drove me to do a background but the shadow idea I had wouldn’t have worked without it. I’m satisfied with how it turned out though I also feel some areas could have been better, but for the most part it looks convincing. I haven’t done a lot of backgrounds. Actually if my memory is serving me correctly I’ve only done one model with a painted background that I would truly count as a ‘background’.

The background in this case is more of a part of the scenery since it’s not just flat and painted on and is built up as part of the model. Backgrounds are tricky to work with and the first time I did it I think the result was good but I didn’t enjoy the flat painting part of it so much. This won’t preclude me from doing it again in the future but I think it will just need to be used only in situations that really call for it. For Marina, I had originally built the background to be about 5cm taller than the finished piece which you can see in the image below. I ended up sawing off the top of the background post painting and repairing it up and thankfully that was possible to do without ruining things which I’m glad about. I felt like it was too tall with the added portion on top and because it was in the dark the air conditioner was only getting blue and green light from the sides. It looked ugly to me so it had to go. Maybe it could have worked in person but in picture sit would probably detract from the finished result and I think in the end it was best to go for the more focused look on this model. What do you think, did I make the right call here?